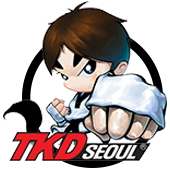 About Tae Kwon Do

Tae Kwon Do is one of the most systematic and scientific Korean traditional martial arts, that teaches more than physical fighting skills.  It is a disciple that shows ways of enhancing our spirit and life through training our body and mind.

The word “Tae” “Kwon” “Do” is composed of three parts as shown in the English spelling.  In Korean “Tae” means “foot,” “leg,” or “to step on”; “Kwon” means “fist” or “fight”; and “Do” means the “way” or “discipline.”  If we put these three parts together, we can important two important concepts behind “Tae Kwon Do”.

First, Tae Kwon Do is the right way of using Tae and Kwon ‘fists and feet,’ or all the parts of the body that are represented by fists and feet.

Second, it is a way to control or calm down fights and keep the peace.  This concept comes from the meaning of Tae Kwon Do or ‘to put foot and fist under control’.  Thus Tae Kwon Do means “the right way of using all parts of the body to stop fights and help to build a better and more peaceful world.”

A BIT OF HISTORY

Tae Kwon Do is a Korean martial art.  Although it was officially declared a martial art in 1955, its origins can be traced back almost 2,000 years, to the Koguryo Dynasty, to drawings on the ceiling of a royal tomb that appear to depict fighters in a Tae Kwon Do contest.  In another tomb, a drawing of two wrestlers, presumably competing in a cireum (the traditional Korean form of wrestling) match was found.  These early fighting methods are said to have originated from five principles laid out by a Buddhist monk named Wong Kwang: be loyal to your king; be obedient to your parents; be honorable to your friends; never retreat in battle; and kill with justice.

Ancient Korea at this time was divided up into three kingdoms: Koguryo in the north, Baekchae in the west, and Silla in the southeast.  Silla was the smallest of the three kingdoms and lived in constant fear of being overrun by its larger neighbors.  In the sixth century, the King of Silla, Ching-Hung, organized an army of young warriors called the hwarang (translated as "the flowering manhood") to protect his kingdom.  These warriors were trained in the ancient open-handed martial arts of taekyon (foot fighting) and subak.  They formed a formidable fighting force, and their style became known as hwarangdo, or "way of the flowering manhood."

Martial arts remained popular in Korea for hundreds of years until the country went through a period of antimilitary rule.  Even then, however, they were still practiced daily by the masses.  Then, in 1909, Japan annexed Korea, banned all traditional martial arts, and forced students to take up Japanese martial arts, such as karate, judo, and jujutsu. Korean arts survived, however; some people practiced them in secret, while other martial artists fled to China.

After Korea was liberated from Japan in 1945, the government made a special effort to rekindle interest in the traditional arts.  It sought to unify them under a single Korean art form in an effort to revitalize the traditional art of subak.  In the meantime, an army general, Grand Master Choi Hong Hi, had begun a quest to research martial arts in 1938, when he had gone to Japan to learn karate.  General Choi had been a student of taekyon in Korea before going to Japan.  After attaining a 2nd dan black belt in karate, he returned to Korea to complete his taekyon studies.  General Choi drew on influences from taekyon, subak, and karate to create taekwondo.  Seventeen years later, his diligent research eventually culminated in the formal recognition of Tae Kwon Do as the official martial art of Korea at a special conference on April 11, 1955.